Home Unlabelled How MMM has been RESTRUCTURED to last Longer than your imagination.

How MMM has been RESTRUCTURED to last Longer than your imagination. 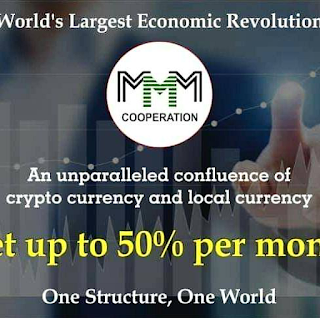 We greet you in all tidings. And we appreciate your commitment to the community since it's inception on Jan 22nd 2019. As you all know, we are with intention to make legacy of our dear friend Sergey Mavrodi lives on. And that is what brought us all together in MMM COOPERATION.

We have used the old algorithm known with MMM for the past 6months but now, we see the necessity to implement the new algorithm that
would make our community to be with you all forever and much longer year. In implementation of the new algorithm as to give a good start up for the new system, there would be some "ADJUSTMENT" to the existing mavro ( PH principle amount, Direct Referral and Guiders Bonuses and Growth on the Principle amount) and there would INTRODUCTION OF RECOMMITTMENT to MMM COOPORATION. As you are all aware, that our PH and GH is ongoing and people are being matched without any delay before we decided on the implementation of the New System.

Note that it is better we adjust the system now and introduced the new algorithm than later as introducing it later might have not too good effect on the system. With the new system, we would curb all issues being encountered majorly on Fake POP, there would be constant PH by Guiders and many more. We stand with our assurance that no participant will loss a possession in MMM COOPERATION and that MMM COOPERATION would always be with you.

The way the new system would work is attached below:

1) All mavro in the old algorithm/system ( Principle Amount , Direct Referral Bonuses, Guider Bonuses and Growth on Principle Amount) would be transfered to Verification Mavro).

4) In addition to (3), Guiders would only be able to GH 50% of their bonuses , same applies to Referral Bonuses.

- Guider can only GH bonuses based on what the Guider Provided Help of. e.g. If a guider Provide Help of 2000NGN, he would only be able have GH limit of 2000NGN on his Guider Bonuses. The more the Guider PH increases, the more his/her limit increased.

6) In the new system/algorithm , there introduction of "RECOMMITMENT". This is one of the features Sergei intended to introduced before his death. The recommitment would be with same amount you Provided Help of or an amount above the previous amount you provided help of.

7) More explanation on (6). In assumption a participant provided help of 1000NGN on 1st January 2019, at the release date; before participant could GH the 1500NGN, he must provide help of a new 1000NGN or an amount above the 1000NGN and paid 10% through Verification Mavro. After the 10% VM payment which is immediate, GH can now be allowed.

8) Your GH limit would be same amount you provided help of. As an example, you PH 1000NGN and you are expected to GH 1500NGN. The whole 1500NGN would not be GH at once, you first GH your principle amount of 1000NGN and the 500NGN after. This is allow more cash circulation in the system.

10) Note that after payment of 10% through Verification Mavro, the remaining 90% would not be matched until 15-20days.

Dear Mavrodians, we implemented new alogrithm in order for us to have a long term presence of 10-20years which is the wish of our dear friend Sergei Mavrodi . This new algorithm has been implemented in India and Indonesia before now and it's giving amazing result. We believe it would give much more better result in Nigeria. We are not here for short term plan, we are here for longer future moment . And that is what made us to introduced this new system now than later.

Though it might be with little stress but it's better we all go through it now than continue with the old algorithm that not much features as this. The ideology of MMM as stated by Sergei Mavrodi is to have a financial independent society and we are committed to that. We appreciate your steadfast.

To join, register below..