Home News YOUR OPINION:- Banning Twitter In Nigeria – What Bad Effects Would It Have On Nigerians?

YOUR OPINION:- Banning Twitter In Nigeria – What Bad Effects Would It Have On Nigerians? 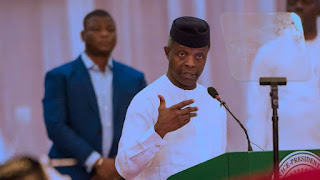 Some days back, while speaking as regards Timi Frank & FIRS issue, the Vice President of Nigeria, Prof. Yemi Osinbajo complained bitterly about the Tweets he saw on Twitter and described Twitter has a junk yard where baseless opinions are been shared to blast the Government.
He complained so bitterly such that he wouldn’t even hesitate to ban Twitter if there’s any slight move to do such and as a Nigerian that I am na,
I don’t know why am having that feeling that the Nigerian Government might soon ban Twitter.
At least, some Countries have banned Twitter and other social media platforms like Facebook, Instagram and even WhatsApp and they are still breathing – China especially.