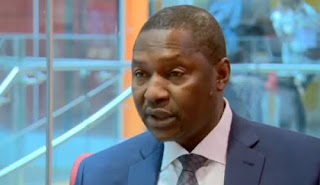 Malami, whose office took over the case brought against Sowore from the Department of State Services earlier this month, on Tuesday ordered the secret police to release the 48-year-old journalist on bail as directed by the Federal High Court, Abuja.
Nigeria’s Attorney-General of the Federation and Minister of Justice, Abubakar Malami (SAN), has given more insight into why the administration of President Muhammadu Buhari decided to order the release of pro-democracy campaigner and journalist, Omoyele Sowore, and a former National Security Adviser, Sambo Dasuki.

Malami, whose office took over the case brought against Sowore from the Department of State Services earlier this month, on Tuesday ordered the secret police to release the 48-year-old journalist on bail as directed by the Federal High Court, Abuja.

The AGF said that unlike the DSS, his office would not disregard Nigeria’s judiciary by deliberately flouting a court order.

He said that it was in line with respecting the judiciary and the rule of law that the government ordered the release of both men, who had been held arbitrarily for months and years.

Sowore was first arrested on August 3, 2019 for calling on Nigerians to take to the streets in peaceful demonstrations to demand a better country from the government and remained in detention until December 5 when he was briefly released on bail.

On December 6, he was rearrested inside the Federal High Court, Abuja, by DSS operatives and had remained in custody until Tuesday when Malami gave the latest release order.

Dasuki on the other hand had been in detention since 2015 over his alleged role in the misappropriation of $2.1bn meant for arms purchase by the administration of former President, Goodluck Jonathan.

Speaking on what inspired the move, Malami said, “The office of the Attorney-General of the Federation has reviewed the pending criminal charges against the duo of Col. Sambo Dasuki (rtd.) and Omoyele Sowore.

“Whilst the Federal High Court has exercised its discretion in granting bail to the defendants in respect of the charges against them, I am also not unmindful of the right of the complainant/prosecution to appeal or further challenge the grant of bail by the court having regards to extant legal provisions, particularly Section 169 of the Administration of Criminal Justice Act, 2015.

“However, my office has chosen to comply with the court orders while considering the pursuit of its rights of appeal and/or review of the order relating to the bail as granted or varied by the courts.

“In line with the provisions of Sections 150(1) of the 1999 constitution (as amended), and in compliance with the bail granted to Col. Sambo Dasuki (retd) (as recently varied by the Court of Appeal) and the bail granted to Omoyele Sowore, I have directed the State Security Services to comply with the order granting bail to the defendants and effect their release.

“The two defendants are enjoined to observe the terms of their bail and refrain from engaging in any act that is inimical to public peace and national security as well as their ongoing trial which will run its course in accordance with the laws of the land.

“I wish to reiterate again the utmost regard of my office for the entire judicial structure of Nigeria.”

In the weeks following Sowore’s arrest and unlawful detention, a plethora of voices had resonated all across the globe calling for his unconditional release and right to freedom of expression.

The United States Government through the US Department of State, leading lawmakers from the American society, European Union, Amnesty International, leading and renowned scholars including in Nigeria are among dozens of institutions, groups and individuals that condemned Sowore’s unjust arrest and incarceration by the Nigerian Government.