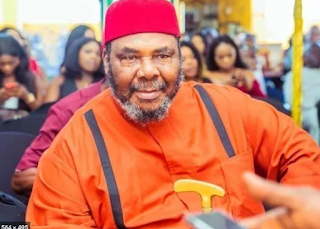 Veteran Nollywood actor, Pete Edochie, has said it is not culturally ideal for Nigerian men to kneel when proposing to a woman. He referred to such men as fools and idiots.

The 72-year-old movie star disclosed this in a video that that went viral on Twitter on Thursday.

In the footage, he is seen airing his views on the practice that has become a signature of many Nigerian marriage proposals.

“Any young man who gets on his knees to propose to a girl, is not just an idiot, he’s a bloody fool, a compound buffoon,” he said.

“We are trying to copy white people, right? I believe in the sacrosanctity of our culture, the essence and the core of our culture.”

Edochie also said that men kneeling to propose to women suggest they are handing over the union’s authority to the women.

“The white man kneels down to propose to a girl, you know what it means? The girl takes over the family,” he said.

“This is why whenever you disagree with your wife overseas, you are kicked out and the wife takes the house. As a young man, you should be in charge of your destiny. Kneeling down for a woman makes you a fool”.“Kneel down before your wife and I’ll sympathise with you when she takes over the home.”