A Fidelity Bank staff who recently returned from a trip to the United Kingdom has tested positive for COVID-19 as confirmed in a statement released by the bank.

Though the Fidelity Bank staff who tested positive for coronavirus has not been at the bank’s facility as he has been self-isolating since he returned to the country, he however brought some consignments for two of his colleagues which were delivered to them individually.

The bank staff who received consignments from the coronavirus patient, have been made to self-isolate and the office where they work has been temporarily closed. No customer was identified in the contact tracing that was carried out.

A statement released by the bank’s divisional head for brand and communications, Charles Aigbe reads;

The bank said it is carrying out other measures like reducing the number of staff expected to report physically at work and number of customers allowed at a time in the banking hall to a maximum of five to curb the spread of the virus. 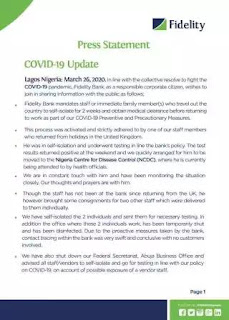 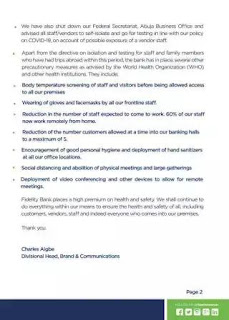